In Werner Penzel's film, Zen for Nothing, Swiss actress Sabine joins life at a small Soto Zen monastery in Japan to learn more about herself. ZEN FOR NOTHING is a Zeitgeist Films release in association with Kino Lorber. To book this film please contact Nancy Gerstman or Emily Russo or call 212-274-1989. Trailers (Quicktimes), a press kit, jpegs of the poster and stills can be downloaded from our Dropbox.

Also posted are over 20 years of reader comments.

In 1858, at a grotto by the river Gave near Lourdes, France, a 14-year-old peasant named Bernadette Soubirous claimed that the Virgin Mary, identifying herself as 'the Immaculate Conception,' appeared to her some 18 times.* You'd think such a great number of visitations would have provided an opportunity to channel a short theological treatise of some significance. It seems, however, that the main message from the alleged 'mother of a god' was: 'Pray and do penance for the conversion of the world.' Oh, and take a drink of the spring water.>>more

sample Mysteries and Science (for kids 9 and up)

In a nutshell: Gods are beings with unnatural powers who never die. Some are believed to be the controllers or creators of various parts of nature. Many are thought to require worship and obedience from humans. These gods reward or punish us depending on whether we please them.

Stories of gods have been told in most societies that we know of going back at least 10,000 years. Gods are portrayed as beings who never die, with mighty powers, able to make nature do what they want. Most gods are pictured as being born and having parents. Some stories show gods as being able to change the weather and cause mighty storms, floods, earthquakes, or volcanic eruptions. For the most part, scientists have replaced stories about gods with scientific explanations of how the universe was formed and how humans and other living creatures evolved.>>more

a blast from the past

'...belief in an omnipotent omniscient creator of the world does not in itself have any moral implications—it's still up to you to decide whether it is right to obey his commands.' --Steven Weinberg

'...if human beings are anything special, we are the creatures that must ponder and talk.' --Stephen Jay Gould

The lack of conflict between science and religion arises from a lack of overlap between their respective domains of professional expertise—science in the empirical constitution of the universe, and religion in the search for proper ethical values and the spiritual meaning of our lives. The attainment of wisdom in a full life requires extensive attention to both domains—for a great book tells us that the truth can make us free and that we will live in optimal harmony with our fellows when we learn to do justly, love mercy, and walk humbly.

Then, all hell broke loose.>>

'Whatever you may think… It's gone already…' Zeitgeist Films, in association with indie distributor Kino Lorber, have debuted an official US trailer for an indie documentary titled Zen for Nothing, from Swiss filmmaker Werner Penzel. This already opened in Switzerland (and some of Europe) back in 2016 but is just now getting a small US release for those interested. The documentary shares the experiences of Sabine Timoteo from Switzerland, arriving as a 'Zen novice' inside a Japanese zen monastery called Antaiji. The film is a 'masterly immersion into life' at this monastery, presented across three seasons - Autumn, Winter and Spring. 'Simple and beautifully filmed, this is Into Great Silence meets Enlightenment Guaranteed, with composer Fred Frith performing the eclectic, elegant score.' This looks to be a very calm, meditative, contemplative doc that may appeal most to those curious about Buddhism and living a truly zen life. Enjoy.

Here's the official US trailer (+ poster) for Werner Penzel's doc Zen for Nothing, from YouTube:

Provocatively titled, this documentary film is a masterly immersion into life at a Japanese Zen monastery over three seasons. Swiss novice Sabine arrives at Antaiji and, after a brief welcome, she begins to learn the monastery rules: how to bow, sit in the meditation hall, carry out movements with chopsticks, etc. There’s more to life there than meditation, farming, and maintenance, however—there are picnics, music, and Wi-Fi. And after the last snow has melted away, the nuns and monks travel to Osaka, where they recite sutras in front of subway entrances as they solicit offerings in their traditional monk’s robes. Quotes from renowned early twentieth-century Antaiji abbot Koda Sawaki are interjected throughout. Zen for Nothing is directed by Swiss filmmaker Werner Penzel, director of the doc films Vagabond's Band, Step Across the Border, Middle of the Moment, Brother Yusef, and Lucie im Wunderland previously, as well as a few features. This already opened in Switzerland & Germany back in 2016. Zeitgeist Films will finally release Penzel's Zen for Nothing in select US theaters starting sometime early 2019. Stay tuned for more. Curious? 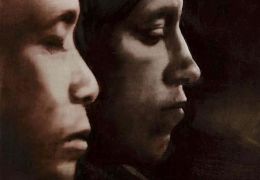 Zen For Nothing Watch online, free

...because it just wouldn't be zen without a Telecaster...

One can hardly resist admiring them. But, the problem with places like this is that they can't be the places for the whole world. And for those who really need to calm down. Their way is just for some, not for all ...

Good to see something like this being made and put out into the world. I loved the 'whatever you may think...it's gone already'. Pure Zen. And the only truth there is because whatever it is you are presently thinking it's gone already...so why get upset or hooked on thoughts? Or anything, for that matter? All is temporary...row your boat gently down the stream...merrily, merrily it's suggested...life is but a dream.

Subscribe to our feed or daily newsletter:
Follow Alex's main profile on :
For the latest posts only

Zen For Nothing Photos

Zazen Is Good For Nothing