Antonio Vivaldi’s Concerto in A minor, Op. 3, No. 6 is well known to all Suzuki violin students. Vivaldi (1678-1741) contributed to the development of the violin as a solo instrument, dazzling audiences throughout Europe with shocking new sounds. He wrote over 500 concertos. For many years Vivaldi also directed the female music ensemble at Ospedale della Pietà, a school for orphaned girls in Venice. 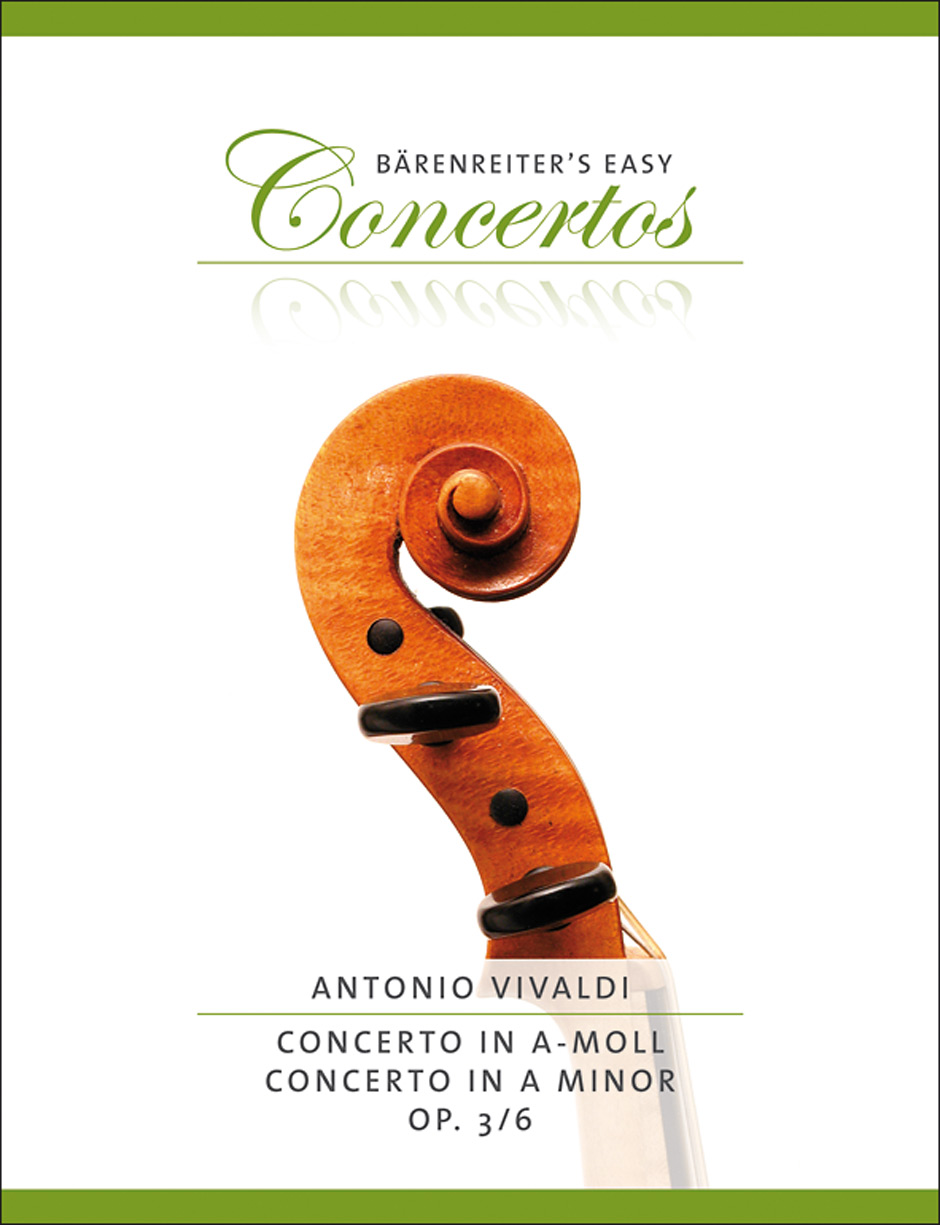 Now let’s hear a performance which attempts to capture the instruments and style of Vivaldi’s time. Baroque soloists often added ornamentation and improvisatory elements similar to the approach of a jazz musician today. This performance is by Tafelmusik Baroque Orchestra: 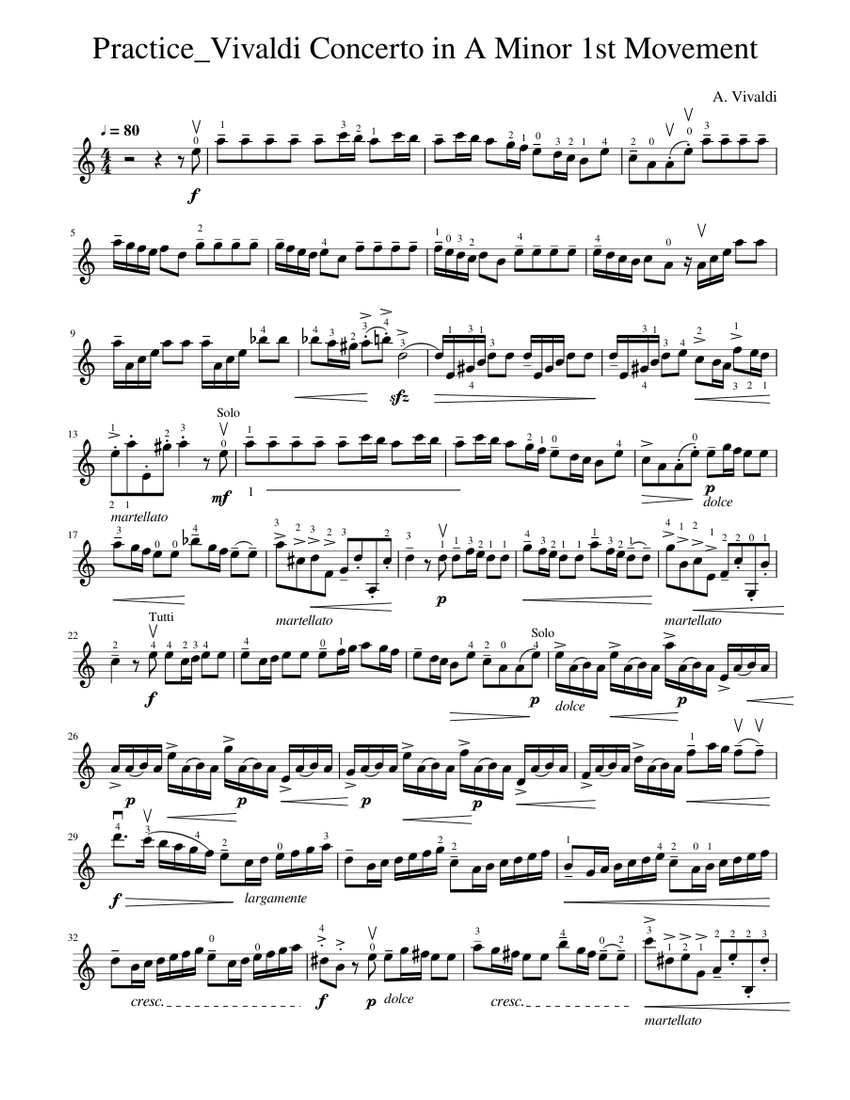 Do you prefer one of these recordings over another? It’s amazing that we can approach the same piece in so many different ways.

Antonio Vivaldi (1678-1741) composed his violin concerto for two violins, Op. 3 No. 8 in 1711. Vivaldi wrote an estimated 500 instrumental concertos, and approximately 40 of these concertos were double concertos (for two solo instruments). Vivaldi was particularly renowned for his contributions to the development of the concerto form. A concerto is an instrumental composition for solo instrument(s), and is often structured in three movements with the sequence fast-slow-fast. The accompaniment for a concerto typically is an orchestra. Prior to Vivaldi, many elements of the concerto were not standardized. Vivaldi helped establish the three movement form of the concerto, as well as inner features of the movements. [12] 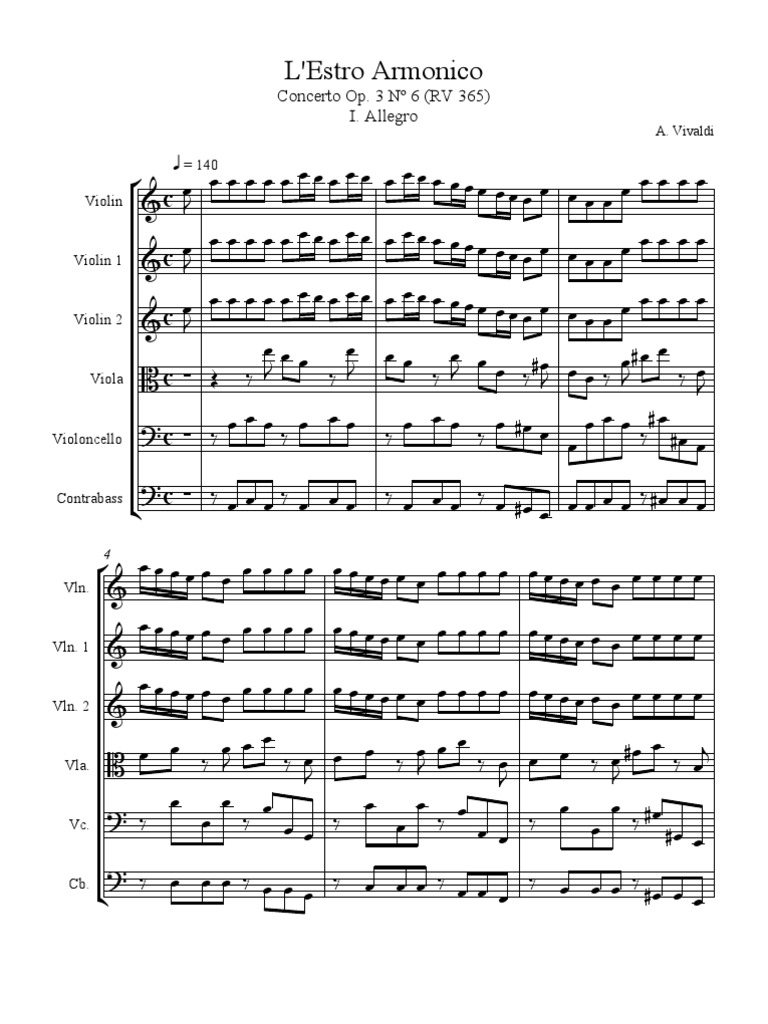 Vivaldi dedicated Op. 3 to the Grand Prince Ferdinando of Tuscany. Dedications often were a way to try to gain the favor (and financial support) of prominent patrons. Although Vivaldi sold much of his music through commissioned manuscripts, he also gained some profit from the printed sales of his compositions. Op. 3 was published by Estienne Roger, an Amsterdam publisher who apparently revolutionized European music publishing during the eighteenth century. Roger favored the engraved method of printing, a process which was more pleasing to the eye, more flexible, and better suited for short runs than the movable system of printing favored by most publishers in Italy during this time. Roger's commercial success was not only due to the new technology he used, but also was the result of increased consumer demand and the wide network of selling agents he had developed throughout Europe. Amateur musicians were apparently eager to acquire new sheet music they could play, and scholar Michael Talbot described how this contributed to composers from Italy commencing a 'flight to Amsterdam' to have their works published by Roger so they could profit from the sale of their music:

Italian composers purportedly began to write music with the partly amateur northern European market in mind. The result was an increased sensitivity to fashion, a certain cosmopolitanism, a restraint in matters of instrumental technique and an avoidance of those elements of bizzarria (deliberate strangeness) which might captivate an Italian connoisseur but would be found freakish and unnatural by a Dutch or English gentleman. [13]

Op. 3 was titled 'L'estro armonico' which means 'The Musical Inspiration' or 'The Harmonious Fancy.' It is a collection of 12 concertos for solo violin or groups of violins with a small orchestra. 'L'Estro armonico' had a tremendous impact on composers in Northern Europe. After this work was published, several composers traveled to Italy to take lessons with Vivaldi, while others paid him the more subtle compliment of making arrangements of his music (such as J.S. Bach, who arranged five of Vivaldi's concertos from 'L'Estro armonico' for keyboard).

TECHNIQUE TIPS: The first movement from Vivaldi’s Op. 3 No. 8 is used in this arrangement. Although it is a double concerto, in this arrangement, the melody features the primary parts of both solo instruments. The tempo is allegro, meaning use a quick, lively and fast tempo. You also may want to try using a short bow stroke in the upper third of your bow for the fast passages. Music scholar David Boyden described how Baroque violinists often used a separated, slightly articulated bow stroke for fast passages:

In musical terms the bow stroke of the early eighteenth century produced what was, by modern standards, a relatively light, clearly articulated tone; and the normal nuanced style of the full bow stroke was far more expressive than the modern counterpart. A kind of non-legato stroke must have resulted from the rapid wrist articulation of fast notes, approaching the modern spiccato in effect, but attained without actually leaving the string. [14]