The new Evernote Smart Notebook designed by Moleskine uses Evernote's Page Camera feature to capture the pages of your notebook with your smartphone or tablet. Evernote Page Camera is available for the current iOS and Android release. Moleskine Smart Notebooks enable you to pick up a pen or pencil and create freely on paper first and then quickly and smoothly transfer your drawings, notes or sketches into digital format so you can continue to organize, edit and share them from your computer or digital device. Moleskine's digital writing set was unveiled back in June 2016. It followed a number of co-branded Adobe, Livescribe and Evernote digitizing tools. Conceptually, it made a lot of sense for people. The Evernote Notebooks by Moleskine are the first paper notebooks specifically designed for users who would like to create digitized versions of handwritten notes. Evernote not only captures your physical notes, but optimizes them and seamlessly integrates them with Evernote accounts. 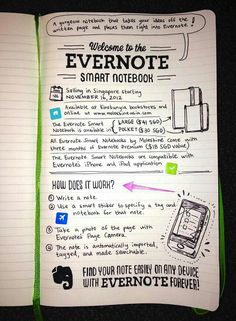 Note taking has been around since of course long before they were computers. And there is definitely a difference in the process when you’re taking notes by hand.

That probably surprises you coming from me.

Recently I have in fact rediscovered the difference and even the importance of that difference between taking notes by hand versus writing them in some digital format. The Evernote Moleskine notebook combines the best of both of these worlds.

The Evernote Moleskine notebook intrigued me when I first started to understand what they were and what they did.

It’s the perfect combination. I can take most of my notes with Evernote, but when I feel inclined to take them by hand.

Not to worry, nothing will be lost. I can take notes by hand using the Evernote Moleskine notebooks. Then I take my photo note with Evernote to preserve that note permanently. 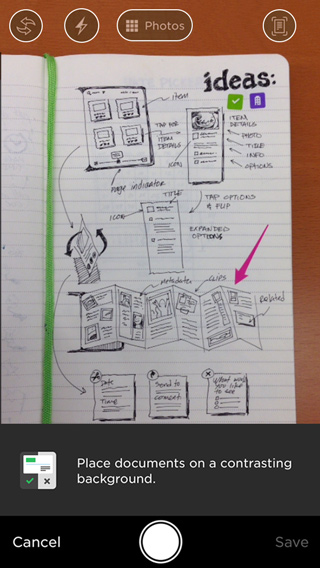 The idea is great and the notebook seems ideal but I did run into some problems when I got my first Evernote Moleskine notebook.

I immediately wrote down a test note in my brand new Evernote Moleskine notebook.

I applied one sticker, checked off the check box for the reminder, and also wrote something in the private notes section. I wanted to test every aspect of this notebook and how it works with the Evernote app.

Everything I tried seem to fail.

Nothing seemed to be able to get the Evernote app to recognize that this was a note coming from an Evernote Moleskine notebook.

The private part of the note didn’t work.

The sticker didn’t even work at first.

How to get the stickers in the Evernote Moleskine notebooks to work.

After trying everything else that I could think of, I tried one more thing.

I tried saving the photo note in each of the available formats.

This is where I found the solution at least insofar as how it works with the sticker.

The format of the photo that you save has to be a “color document.”

Any other photo format that you save will not work. At least not on the Android.

Then I commenced to find out why the reminder and the private sections weren’t working.

Moleskine support told me I needed to talk to Evernote.

Evernote support didn’t seem to be reading my comments as I initially got back the generic instructions for how the notebooks work with Evernote. The same lack of documentation and explanation frustrated me.

After going back and forth several times, I even sent a short video.

I finally got somebody who was able to pay attention and give me the proper answer.

The reminders feature and the private section of the note do not work with Androids only with iOS.

So if you’re an app on iOS user you’re in luck you have access to all the features that the Evernote Moleskine notebook offers.

If you’re an Android User like me the only thing you get to use are the stickers. These stickers are pretty and fun but for $25 I could get four notebooks at the local supermarket and essentially accomplish the same thing.

So here’s the rub

To be honest it doesn’t save me a whole lot of time to be able to use the stickers to tell Evernote which notebook and tags to use. I can do that myself very easily in the app, immediately after I’ve taken my photo note.

So there you have it my review of the Moleskine Evernote notebook.

I’m sending some out as gifts to some people this year, but in retrospect if I knew how it didn’t work originally, I probably would have found another gift to give.

Still the idea of it is very cool and the notebooks are pretty nice so I’m not totally upset that I got this and I think the people I’m sending them is too will really appreciate it – especially that it came from me.