© NICHOLAS KAMM/AFP/Getty German Chancellor Angela Merkel and President Donald Trump speak during a bilateral meeting on the sidelines of the NATO summit in London on December 4, 2019. A spokesperson for Merkel told reporters on Monday that she views Twitter's suspension of Trump's account as 'problematic.' 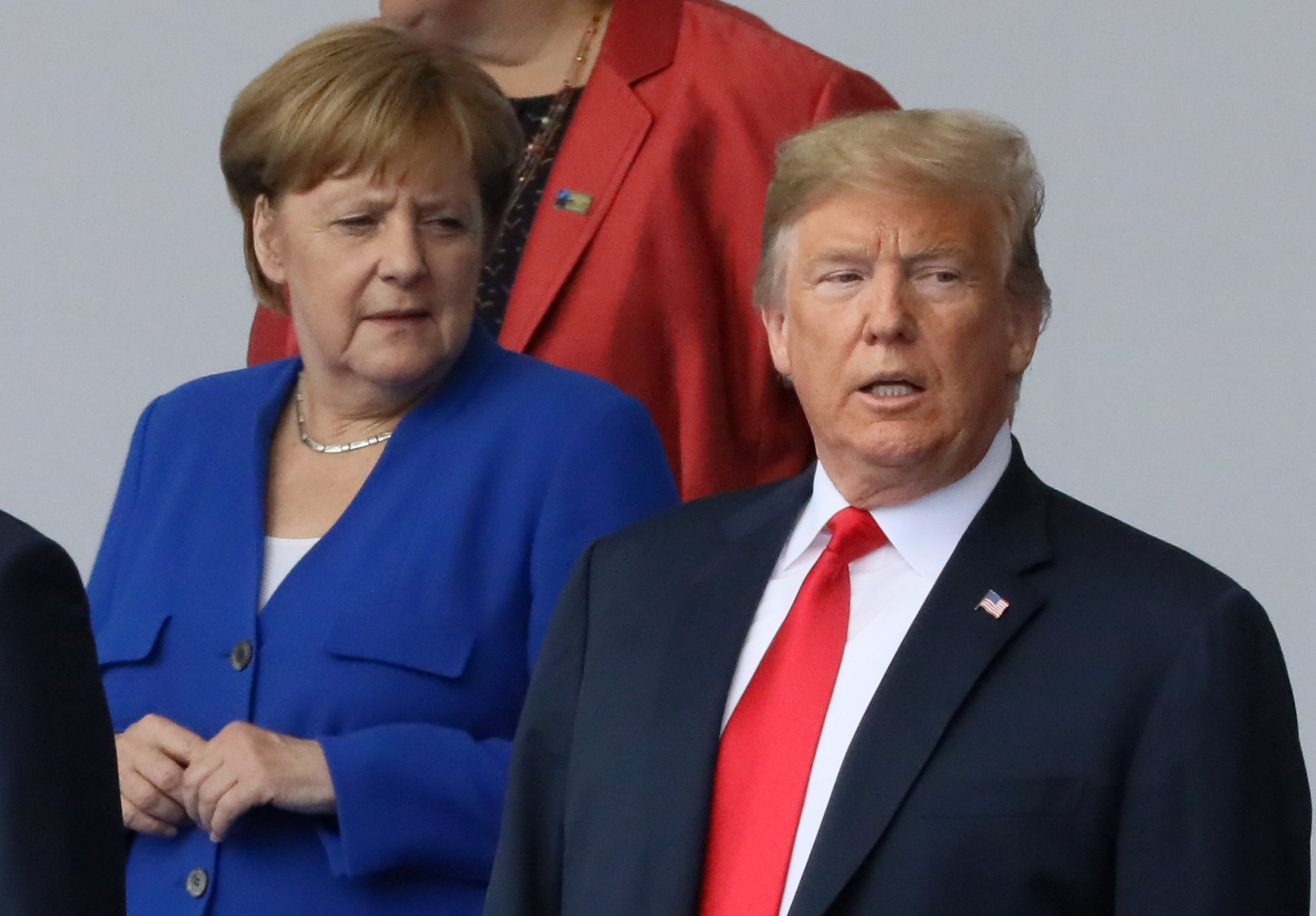 German Chancellor Angela Merkel said she believes Twitter and other social media companies' decision to ban President Donald Trump from their platforms is 'problematic,' a spokesman told reporters in Berlin on Monday.

Twitter permanently banned Trump from its platform last Friday, citing the 'risk of further incitement of violence' and noting that the president had repeatedly violated its policy standards. Facebook and Instagram, which is owned by Facebook, similarly suspended the president's accounts through at least January 20. The tech giant's founder, Mark Zuckerberg, said 'the risks of allowing the President to continue to use our service during this period are simply too great.'

Although Democratic lawmakers and activists cheered the decision, and some Republicans voiced support as well, many of the president's supporters slammed the social media companies' actions as a violation of free speech. Merkel spokesman Steffen Seibert suggested on Monday that she is concerned about the implications of Twitter's and Facebook's decisions.

'This fundamental right can be intervened in, but according to the law and within the framework defined by legislators—not according to a decision by the management of social media platforms,' Seibert said. 'Seen from this angle, the chancellor considers it problematic that the accounts of the U.S. president have now been permanently blocked.'

Seibert also said that social media companies should not simply 'stand back' when hatred and incitements to violence are posted. However, he stressed the importance of protecting the freedom of opinion.

'As I have been saying for a long time, Twitter has gone further and further in banning free speech, and tonight, Twitter employees have coordinated with the Democrats and Radical Left in removing my account from their platform, to silence me,' Trump said in a statement after the Twitter ban. The president suggested he would start his own social media platform.

Donald Trump Jr. tweeted on Friday that 'Free Speech Is Under Attack!' He said that 'censorship is happening like NEVER before! Don't let them silence us.'

Although many Republicans and conservatives have raised the same concerns as the president and his son, others have suggested they support the social media companies' decisions.

GOP Representative Adam Kinzinger of Illinois tweeted a quote from conservative commentator David French on Saturday. 'The most powerful man in the world incited an attack on our republic. The free American citizens who work for Twitter responded with an action freely chosen. And MAGA voices wail about lost followers as evidence of totalitarianism. Snowflakes,' the quote shared by the Republican lawmaker said.

The social media companies' moves came after years of little action against the president and his supporters. Ahead of the November election, the companies began taking more serious action to combat misinformation shared widely on their platforms. But the heads of Twitter and Facebook saw the violent insurrection incited by Trump as a last straw.

Hundreds of the president's supporters stormed the nation's Capitol last Wednesday, leaving five dead. The assault came following a rally featuring the president at the Ellipse in Washington, D.C. During a speech at the event, Trump told his followers to march to the Capitol and to 'fight harder' to overturn the election results.

Trump has been widely condemned for inciting the violence, with several GOP lawmakers calling for his resignation or for Vice President Mike Pence and the Cabinet to invoke the 25th Amendment to remove him from office before President-elect Joe Biden takes office on January 20.

Notably, Merkel criticized Trump in the wake of the Wednesday attack. 'I deeply regret that President Trump has not conceded defeat since November and again refused to do so yesterday. Doubts about the outcome of the election have been stoked, and that set the atmosphere which made the events of the night possible,' she said during a virtual event on Thursday.

Twitter permanently suspended Trump from the microblogging platform on Friday, citing a “risk of further incitement of violence” in the wake of the storming of the U.S. Capitol by supporters of the outgoing president.

Asked about Twitter’s decision, Merkel’s spokesman, Steffen Seibert, said the operators of social media platforms “bear great responsibility for political communication not being poisoned by hatred, by lies and by incitement to violence.”

He said it’s right not to “stand back” when such content is posted, for example by flagging it.

But Seibert also said that the freedom of opinion is a fundamental right of “elementary significance.”

“This fundamental right can be intervened in, but according to the law and within the framework defined by legislators — not according to a decision by the management of social media platforms,” he told reporters in Berlin. “Seen from this angle, the chancellor considers it problematic that the accounts of the U.S. president have now been permanently blocked.”

Merkel herself does not have a Twitter account, although Seibert does and many German government ministers do.