They turned into Dagwon by the power of Bravian, and fought against space monsters. At that moment, the patrol car came in front of En. En grew into the car and turned into the Brave Robot Dag Fire, then beaten the enemy. However, the fight between the Brave Dagwon. Today, Bandai officially announced the release details for the next Brave Command Dagwon release within the Super Mini-Pla line. For those unaware, Brave Command Dagwon is seventh installment within the Brave series, which precedes The King of Braves, GaoGaiGar.The series features high school students being recruited to join an intergalactic police force and become the Dagwon.

Jump to: navigation, search
Like Transformers, except every robot has a face plate, something long sticking out of its head, and a gold chest. And they look likeGundam.

Brave (勇者 Yūsha) is a non-Transformersfranchise that Takara and Sunrise created after the Generation 1 anime ran its course in Japan. The Brave Series consists of eight individual series that were released one after the other from 1990 to 1998 with corresponding TV shows in Japan. The last show in the series received a follow-up OVA beginning in 2000. Although none of the series storylines are connected to one another,[1] the basic format of each series is similar. Usually a kid befriends/creates/becomes a sentient robot, and together they fight a great evil threatening the Earth. The main robots combine with other vehicles and robots to become larger robots, and additional teams of sentient robots combine amongst themselves to form larger robots as well. This structure had been established in Victory and would be reproduced almost beat-for-beat in every Brave series. The Brave franchise has been described as a cross between Transformers and the Super Robot genre of the late '70s and early '80s. 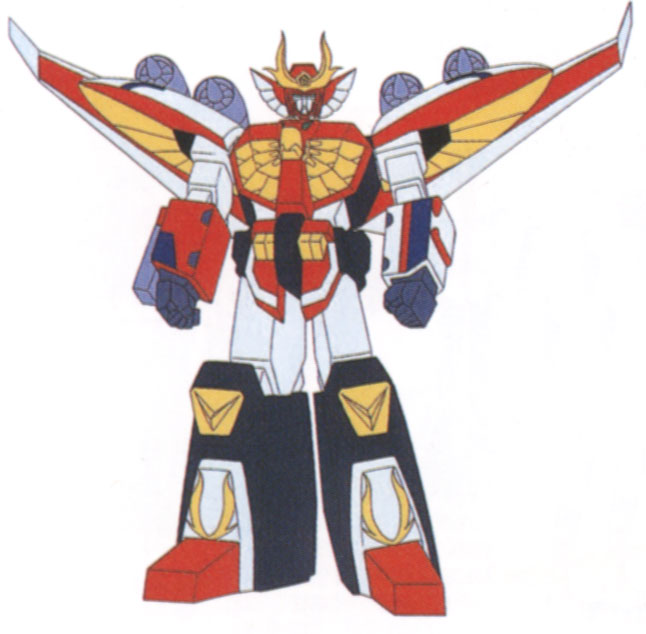 The Brave series consisted of:

Toys for these robots were created in two sizes: DX ('deluxe') versions that contained more gimmicks and more complicated transformations, and STD ('standard') versions that contained fewer gimmicks and more limited transformations (often resorting to partsforming), but often also higher accuracy in reproducing the look of the robot from the anime series. Generally, the toys were created by Takara's Takashi Kunihiro and Sunrise's Kunio Okawara, doing engineering and design work respectively. The duo had already collaborated in the creation of Star Saber from the aforementioned Transformers Victory. The toys not engineered by Kunihiro are believed to be engineered by Hisashi Yuki.

The initial concept designs for Brave Exkaiser, the first Brave series, were intended to be Transformers designs. While the Brave robot Ultra Raker was very far along at this stage, the Max team and King Exkaiser bore little resemblance to their final designs.

The Brave toys also have design elements similar to Generation 2 and Beast Wars Transformers, which were released around the same time as the Brave toys. For example, many of the Brave of Legend toys have light-piped eyes thanks to transparent pieces of plastic in their heads, a design element which many Generation 2 Transformers share. The Goldran DX toyline contains many projectile launchers, something Generation 2 shared as well. In particular, the Goldran toy 'Advenger' contains a rotor-launching gimmick identical to that of the Rotor Force from Generation 2, and the 'Captain Shark' figure has a Gatling-gun style launcher, the same as Generation 2Dreadwing. Lastly, the elbows of Leon from DX Leonkyzer contain ball joints, a design element that gained much broader use during Generation 2 and even more so during the Beast Wars toyline. In addition, Might Gunner's shoulders have twin barreled cannons on them, in the same manner that Scorponok does, due to Kunio Okawara co-designing both characters.

And to think, Red Geist's toy doesn't even have any remolding.
The Brave Series also reused character designs and toys from previous Transformers series. It was not uncommon for the recycled designs to appear in a Brave TV show, but not in toy form. These designs were often significantly augmented to distinguish them from their Transformers counterparts. For example, the four Geister henchmen in Exkaiser use character models of four of the five Dinobots (minus Grimlock), but with all-new faces, body detail and color schemes. Of the designs that did appear in toy form, some of them were retooled to reflect these changes, whereas others were simple recolors. (A complete listing of the reuses follows in the section below.)

One striking difference between the Brave and Transformers toy lines is that very few villain robots were released in the Brave series. This is in sharp contrast to most of the Transformers series, in which heroes and villains are released in relatively equal numbers (with the exception of Zone and Return of Convoy). Generally speaking, the lack of villain toys is more the norm for such toylines in Japan, with the various Transformers lines (save for the aforementioned two) being the exception.

Despite the Brave series's reuse of many Transformers molds and character designs, Brave toys have never been reused in a Transformers toy line. This is likely because the characters that the toys represent are owned by Sunrise. That said, a Brave mold was finally reused in 2008, when Might Kaiser's trailer was modified and included in TakaraTomy's Tomica Hero: Rescue Force as part of the toy Zero Fire. Although Hasbro never released Brave toys in the West, they apparently did receive samples from Takara on at least one occasion.

Similar to Brave being influenced by Transformers, subsequent Transformers lines have also been influenced by the Brave Series. The Japanese Mini-ConKingbolt's coloration and characterization are homages to the Brave series Exkaiser. The Cybertron cartoon featured many homages to the Brave series, most notably the way Optimus Prime combines with Leobreaker and Wing Saber, which is similar to the way GaoGaiGar combines with Goldymarg and Stealth Gao respectively. As well, Hot Shot's transformation scheme is almost identical to various car robots from the Brave series, those being Dran, Dag Fire, and Volfogg. The battle between Optimus Prime and Galvatron contains several visual references to the final showdown between Great Exkaiser and Dinogeist from the anime series Brave Exkaiser. The Animated characters Jetfire and Jetstorm are similar to Enryū and Hyōryū from GaoGaiGar, both with respect to their elemental motifs and method of combination. Animated also has a brief cameo appearance by Dagwon's Dag Base. Shattered GlassEsmeral's color scheme is based on Red Geist, a redeco of her Victory counterpart's husband. Brave Police J-Decker mecha Duke Fire and Shadowmaru inspired the Autobot drone Duke Fire and Decepticon Greatsix. Meanwhile, the human police superintendent Juzo Saejima also inspired the Generation 1 human Saejima.

One ninja is deadly. A bunch of ninjas are cannonfodder. Two ninjas are... um...

It was originally assumed that Duke Fire from Brave Police J-Decker was a homage to New Rodimus. However, following a discussion with Duke Fire's designer, this proved to be a coincidence.[2]

Vector Prime was asked whether or not Brave was a part of the Transformersmultiverse. Unfortunately, the Prime seemed to have misinterpreted the question. He did, however, express a fondness for the adventures of Princess Merida and Queen Elinor.

The events of the Brave anime were later established to take place in the Cymond Cluster, which bordered the Megaverse and only possessed a tangential connection to the goings-on elsewhere in the Transformers multiverse. Ask Vector Prime

The main protagonist and the fire warrior.

En's Childhood Friend who he often butts heads with.

An alien who comes to assist the Dagwon team later in the series.

The alien responsible for giving the Dagwon team their powers.

The initial antagonist who destroyed the Alien Kens a long time ago.

One of a trio of brothers who take over the antagonist position later in the series.

One of the trio of brothers who take over the antagonist position later in the series.

Leader of the trio of brothers who take over the antagonist position later in the series.

A being with an asteroid-like body that crashed into Sargossa long ago. Able to possess both machines and organisms, he is the root of the prison break leading to the events of the series.